A Global Player from the Start

With offices in Singapore and New York, Jay’s global jet-setting and determination to work with the very best was a drive he had from the very beginning. “I actually received my diploma in electronics and communications engineering. However, I am a tech kind of guy…whose first love has always been music.” After college, Jay travelled to Los Angeles and studied music at the Musicians’ Institute, graduating with Honors in Studio Guitar. At that time, one of his heroes was Tom Scholz, founding member of the 70’s and 80’s super band ‘Boston’. Jay says. “Aside from being a great guitar player that played with a kick-ass band, he’d attended MIT and studied electronic engineering, in the process creating the Rockman (an iOS–sized device that allowed you to dial in a great guitar tone without the need of an amp). Because I identified with that, he really inspired me to follow my twin passions of music & technology. So after finishing music school, I played a lot of clubs, sessions and did everything musicians did, and then I found out I wasn’t quite Paul McCartney.”

With his creative and technical foundation well honed, Jay switched gears and started channeling his energy and skills into scoring commercials. He went back to Singapore, and thanks to his technical experience and musicianship, he was able to align himself with some of the best creative directors in the country. But he didn’t just sit in the sound room creating tracks. He became friends with many of the directors, and more often than not he attended commercial shoots. Seeing the production first-hand, he knew that this was where he wanted to be. It was then that Jay made his move to create more than just audio bits.

After a second round of education, this time in video production, Jay established the Moving Bits production company in 1998. Although digital video was still fledgling in the late 90s, Jay kept the editorial house on the cutting edge of technology, employing only the latest in digital non-linear editing solutions and infrastructure. After a few years and several successful campaigns, Moving Bits really started to take off. Jay had a lot of work coming in from companies like Universal Studios Singapore, and a number of these projects were cross-Atlantic. The Moving Bits production staff was shooting in both Los Angeles and Orlando and sending the footage back to Singapore for dailies production. With no cloud-based technology, it was difficult to share and turn dailies quickly or inexpensively.

“It was at this point we needed to evolve our infrastructure to better manage the dynamic production schedule,” Jay says. “However, in 2009 and 2010, Internet connections were not nearly as evolved and we did not have fiber installed. But in the end that didn’t matter because in EditShare we found the answer to all of our problems.”

Thanks to EditShare’s support for Gigabit Ethernet and NLE project sharing, the Moving Bits team was able to roll out the new storage platform within days and benefitted from the media sharing capabilities instantly.

“We do both commercial and some long-form program work which requires the whole gambit of post capabilities,” Jay says. “We have 3D, motion graphics, visual effects and of course a stable of editors who do the cutting. Because of my music background, we often score projects. The EditShare setup is brilliant because we have the motion graphics suite, the 3D Suite, the VFX suite, the audio suite and all of the editors hooked up. Everyone is able to search and access media, and there is no looking for a drive or copying footage from one drive to another because it’s at their fingertips. For larger projects where multiple editors are working on a story line, the project sharing is just phenomenal.” 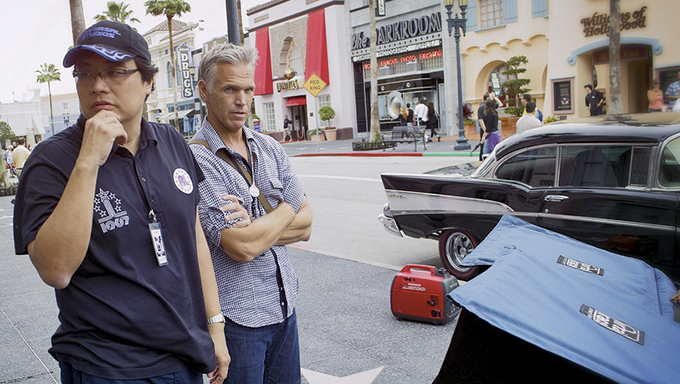 Before EditShare, the team had a sneaker net setup with drives everywhere and a lot of time spent logging and categorizing which one had which content. “We don’t sneaker net anymore,” Jay says. “The whole building is rigged, and everyone who needs to be is hooked up to the EditShare. If the producers need to pull a rush or a daily for a client to have a look or to transcribe something that someone may have said, they can do that. If I need to check on something, I don’t need to ask someone to send it to me. I’ll just pull up my Final Cut Pro and there it is. The only reason we can do that is because EditShare centralizes and perfectly tracks our content. It’s amazing.”

The setup also helped Moving Bits meet some very tight deadlines for high-profile projects like the Smithsonian’s Chilean mine documentary, which they had three months to shoot, edit and deliver.

“It was not a lot of time. In fact, it wasn’t enough time unless we edited the piece around the clock. To work around this, we shot the Chilean mine crisis re-enactments in Colorado, replicating the footage from the small storage platform on-location to the EditShare located in the Singapore office. Because each location had a 12-hour time difference, we had a US-based editor who would start editing and then at the end of his day he would send the Singapore office the Final Cut sequence file. Because the footage had been replicated on both ends, all our editors here in Singapore needed to do was open the sequence and go. It was very efficient.”

Since the Chilean documentary, Moving Bits not only continues to use Final Cut Pro but has added Premiere Pro into their arsenal of tools for editing. “The beauty of EditShare is that it will handle any file format, which allows us to use any camera and it plays well with all of the NLE’s on the market, allowing us to choose the tools that we want to use. No restrictions. This is not the case with other systems out there and I always tell colleagues to read the fine print. This is an industry that changes quickly and you want a platform like EditShare that changes with you, not holds you back.”

So what is next for Moving Bits? “Flow asset management,” states Jay. Flow is EditShare’s Media Asset Management solution offering ingest, automation and remote collaboration capabilities. “The EditShare Flow toolset is definitely very interesting and will help us with some of the complex remote productions, especially the AirFlow module. This will really accelerate the efficiency and revolutionize how we work on projects all around the world.”

With AirFlow “Private Cloud,” collaborators anywhere in the world can use a standard web browser to play, log, search and organize media content, and also upload and download content directly to and from central storage systems. Executive producers on the go can keep an eye on projects and view rough cuts and fine cuts on a tablet or smart phone. Producers can hire and collaborate with the best editor for a job, no matter their editing platform or their location, and organizations with multiple facilities can search for and exchange material from any of their sites reducing production and shipping costs. Essentially AirFlow allows clients to increase the opportunities for creative development outside the boundaries of your facility with no additional IT overheads or large initial set up costs.

We will be back in touch with Jay later this year to see just how much the Flow asset management and collaborations tools work for the team. Stay tuned for more.

Director/Founder of The Media Village and Media ASYLUM.